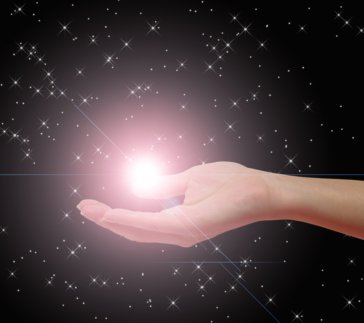 We are vibratory light, manifested from the pure thought of the One. Light is the first creational tool. It is needed to shine on the screen of the non-vibratory construct. As we project our light through awareness onto this screen it reflects it back as creation. This non-vibratory informational construct that gives us our reality, is the earth matrix. Our higher selves are made up of the real light, not the reflection we see in our holographic world. They exist within our deep subconscious mind. The reality we experience is projected from our higher light, within to without.

Our divine light is made out of particles of the creator. Through the energy of the One they start to rotate, through this action they emit light and vibrations which creates sound and colour that is associated with these properties. The rotation also creates a magnetic field.

These divine particles of light are made manifest from the mind of the One, therefore they are intelligent.

All intelligence has awareness as one cannot exist without the other, thus they are vibratory thought.

In order for the game of creation to operate these particles of light need to interact with a form of intelligence, to learn and evolve. This is the reason for creation, without it there would be no purpose.

A construct of intelligence in the form of non-vibratory information is used as the learning tool.

The human characters we animate through our divine light are a part of this non-vibratory informational construct called the earth matrix.

The ego is the awareness of an individual separated human; it sees everything through this perspective.

This is where the conflict that is played out between the higher self and the ego is created, or what is often called good and evil. It is the awareness of unity and the unawareness of it.

The vibratory thought energy vibrates the non-vibratory and animates it as it starts to vibrate.

In our reality we do not see our biological picture but our thoughts reflected back with the thoughts of this construct. The two forms are in interplay and are constantly influencing each other.

This is where the techniques for remote viewing and remote influencing the higher self are important as it will allow you to have more influence over the earth matrix.

The rule in creation is, the higher the vibration the more light that is refracted and will dominate its impression on what refracts less light and vibration and have more influence over it.

The vibratory particles of light through the action of their rotation create energy through their motion. The energy and motion generate emotion or e-motion.

As the higher selves plug into the earth matrix they activate the thought program of the human being and interact with creation through it.

The human being operates between these two opposite poles of light and dark.

If the human vibrates at a low vibratory rate the earth matrix will have more ability to influence its desires onto it.

If the human being can increase its rate of vibrations it can impose more of its desires into its creation.

Through synchronizing your vibratory rate with that of your higher self, beautiful and better worlds will open up for you.

The Remote Influencing Ascension Guide homepage Thought And The Mind