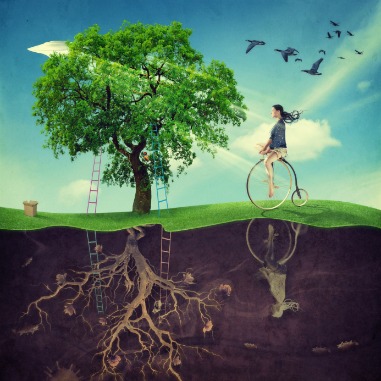 The ability of humanity to operate separately and move collectively within a perception of a whole is through the act of contrast of duality. The co-ordinational effect of the reality experience of humanity or sensory energy connections which connect the individual to the whole being and its reciprocal action through the energetic return flow, are required for the collective development of the reality experience through the cycle of communication of the individual and collective intentions.

The first movement within the creation of the Logos, in which the awareness of duality is a perceptual effect of the cause of the awareness of contrast between stillness and movement, the momentum for creational expression is generated. Through the desire for expansion of desire and intention into expression, the development of thought through the vehicle of self-awareness is initiated into movement by the dualistic expression of energies. Within the creational flow of energies it expands its creational intention into a vast mosaic of self-aware intentional expression.

Dualism can be perceived within all of creation, as every component of creation is created from the contrast of the energy states of stillness and movement. Within the movement of expansive creational intention, a contrast or counterpart is required for the awareness of manifested desire and intention to be perceived as expression.

The ability to perceive the intention of the desire into manifested reality, is through the energetic contrast of movements of expansive intention and contractive expression. The movement of contraction is required for the perception of the manifested expression of the desired intention. The contractive movement of expression generates the reflected light effect of sensory reality. The effect of a sensory reality is created through the movement of intention, within an individualization of creational light, reflecting into the region of reception within its sensory/perception activities.

The vibrational effect of the intention cause, reflected into the individual reality sphere, acts as a gauge for measurement of the cause and effect of vibrational movements of desire and intention of the self-aware vibratory consciousness. The contrast in rate of immediate and constant vibrational activities within the energy formation of the lower self, are registered or made aware of, within the thought communication activities of the differential intentions or aspects within the energy body of the lower self.

Dualism is the energetic movement generated through the interaction of opposable energies, expressed within all of creation and expressed in relation to the ability of perception of the self-aware consciousness.

The individualizations of light positioned within the lower vibrational allowances of severity or oppositional tension, within the vibrational spectrum of the collective thought activities of its being, will operate through the coinciding effect of the vibrational seat of perspective within degrees of contraction of their sphere of awareness. The degrees of contraction within the internal perception into the external perception are the manifestation of the effect of the internal sensing of tension upon the lower energy body.

The self-aware consciousness unable to become familiar with its subconscious processes, observes the manifestation of the internal sense of tension or stress, as an external reality of themes of associative and personalized tension.

The energetic movements of expansion and contraction are the energetic effect of the cause of thought interaction of the self-aware vibratory consciousness. Within the movements of expansion and contraction are coinciding vibrational seats of perspectives. The conscious desire for expansion through the internal influential intentions, which generate the conscious desire, though the communication of vibrational sensing between the energy sphere of the lower conscious and the dynamic motion of the emotional body.

The subconscious desire for the expansion of awareness motioned into the lower conscious is initially influenced by the higher self. The higher self influence of the lower conscious presents a reference frame from a higher perspective into the lower awareness for the ability of contrast. The ability of contrast through a higher perspective allows the lower extension the ability to become aware of the ineffectiveness of the sensing of illogical movements with the held reference frames within the internal belief system.

The higher self influence is allowed entry into the awareness of the lower self through the reconfiguration of the internal belief system, for the acceptance of higher perspective reference frames, through the energetic action of vibrational compatibility.

Within the energy movements of mass thought/focus the cause of the experiences of the personalized participation within duality, is reflected within the collective reality sphere, as oppositional forces within themes co-created through the individual perception. The individual perception is governed through internal subconscious influences and its perception of external influences. The sensory activity of internal and external influences create the energetic cycle, motioned through the thought interaction, reaction and contemplation activities of the co-ordinated participating self-aware vibratory units of creational light.

The heavy collective focus upon materialistic dualism or the awareness and identification of oppositional forces generates, through the collective desire of conscious resolvement, the continuation of dualistic tension within the collective reality of humanity.

The continuation and consequence intensification of the severity of dualistic themes within the collective reality, further establishes the dualistic approach of the reality and necessity of oppositional forces and the sense of separation within the collective reality of humanity. The individual and consensual reaction to oppositional forces within the collective whole, initiate the individual and consensual vibrational movement, within the opposite pole energies supporting through expression the duality consciousness. The directive movements in vibration towards the positive pole and negative pole, generate the observable effect within themes and intentions expressed within sections of humanity, representing division through the differential movements within the pole energies.

The perspective of creation involves contrast through the energetic duality of motion and stillness. The ability of the lower self to experience reality within a lowered or de-energized attraction of degrees of severity, within the oppositional poles lies within its innate ability of vibrational ascension. The effective attempt for the relocation of perspective into a higher vibrational seat and its consequential consensual and collective influence, holds the potential to generate a better reality experience for humanity.

The remote viewing and remote influencing techniques that guide the individual into a position of vibrational ascension, for the opportunity of collective influence, are powerful agents of momentum for the manifestation of a better reality experience for humanity.