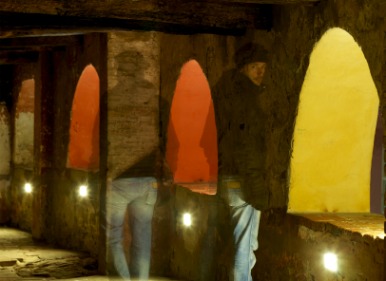 The action of remote viewing dimensions is a continuous activity within self-awareness operations. The self-aware vibratory consciousness creates existence through its ability to be conscious of its existence. The activity of awareness functions within a spherical fashion which allows the movements of expansion and contraction. The location of vibrational consciousness is a point of thought within the One mind and is formed as a sub-sphere within an over sphere for the purpose of self thought evolution. Established existence through self-aware vibrational consciousness or alternative sensing properties to propel thought evolution through interaction can be properly named within the human perspective as dimensional beings.

The requirement for an environment within self-awareness operations is for the purpose of thought interaction with external stimuli and the potential continuation. Within the reality sphere or limitation of senses, the movement into multi-dimensional planes of existence is concurrent with connections of thought and its reactionary movements within physical and non-physical awareness.

The development of perception of the lower conscious will form through the human perspective as it becomes the center of its universe through thought interaction and its movement within the reality sphere.

The thought interaction/reaction/contemplation process of the lower conscious as it moves through experiences can reconfigure the perception of the lower self. This is dependent upon the energetic degree of influence and compatibility with the existing perception established.

The sense of dimension is the reflection of perception involving a space. The sense of perception therefore governs the complimentary senses through the ability of discernment involving the sensory activities of communication and processing of received information.

The awareness of extra or multi-dimensions is a sensing of connection of thought/energy and the feedback of interaction within the communication process. The feedback of information is a product of the sensing and processing of thought references of the point of focus. The communication action is governed by the state of perception or state of mind of the involved points of thought focus and the processing by-products.

The separate thought interaction/reaction process involves remote viewing abilities which are governed by the perception of manifestations surfacing into the consciousness of the self-aware entity. The focussed thought/energy intention involves the observer/observed state of awareness.

Nomenclature, definitions and associative meanings formed through external influence and impressed within the belief system will heavily influence perception.

Modified perception that has been established through the influence of the acceptance and allowance of incompatible data will project into the reality sphere in accordance to degree of impression within the belief system.

The lower self seated within the center point of its reality sphere of vibrational consciousness is operating within a perceived dimension. The parameters of its observable dimensions involve the perception created through the interaction process involving identification, definition and the sequence of selection of references for collection and establishment within the belief system.

The lower conscious regardless of awareness of the reality cycle, involving physical plane manifestation, is remote viewing the interaction between its higher self and a matrix of connecting unifying energies. The free will action of the higher self is influenced through the beliefs impressed within the subconscious region of the lower self as the lower conscious holds the awareness of free will.

The reflected perception of the lower self through the reality cycle is formed through the light energy of the higher self as it passes through the subconscious impressions and onto the reflective screen of the interacting matrix.

Dimensions are a space of perceived existence within a sphere of awareness as it views its reality cycle through a reflective light process. The remote viewing of information of external stimuli through thought connectivity is a state of mind within the complete mind.

The lower self is a creation of its higher self through the higher energy formats participation within a creational matrix through thought connectivity.

The lower conscious views the earth plane through the human attributes of sensory perception through their proper function within the human thought program. The continuous interaction through human sensory functions of the external surroundings for thought evolution is the basis for the purpose of creation.

The level of continuous vibration of the collective consciousness of mankind and mass thought influence, are powerful determining factors in the potential of sensory enhancement.

The human being, within proper function, operates movement and communication functions through perceptions created via the processing of collected data from the thought connection/sensory pathway.

The sense of feel without touch or tension through thought connection and information pathways operating outside of the creational laws of physicality are but a glimpse of the magnitude of capabilities of sensory enhancement.

Dimensional reality involving the physical earth plane is supported through the perception of time as a constant action for the measurement of movement and related purposes.

The sense of time involves the co-ordination of cycles within continuously present manifestations this in turn establishes the human perspective through believable reality.

The sensing of data within the past and future perspectives for the receivement of collected data in the perspective of the now reveals the plasticity of the time/space program.

In regards to the currently held collective belief involving dimensional space operating outside of the physical reality dimensions of the earth plane, the role of sensory perception involving unfamiliar dimensional experiences is greatly under developed.

Without a proper understanding of the energetic sequence of physical plane manifestation and the factoring of ability of the sensory perception process of the observer and observed, the human baseline perspective will govern the ability of remote viewing multi dimensionally.

The manifestation of unfamiliar external stimuli within an individual or collective reality is fuelled through the desire held within the belief system. The desire through its generated emotions and integrated within the individual or collective perception will create the magnetic attraction of un-familiar dimensions and its perceptions of awareness.

The sensing and potential communication of un-familiar entities is the subconscious desire fuelling the awareness of sensory abilities operating outside baseline human perception.

The higher sensory functions are always available to the lower conscious for exploration outside the time/space perspective of the earth plane. This is in relation to the proper functioning and processing abilities of the brain/mind and its connective properties.

The desire and belief of the ability of extra sensory communication will create the energy required for expansion of consciousness towards the enhancement of sensory perception and communication abilities. The surfacing into the awareness of the lower conscious of higher sensory abilities through the observable effect of the cause of desire is the manifestation of its awareness through conscious expansion.

This activity involves the properties of duality as the extra senses are activated and non-activated simultaneously, the perception of the observer and its observable reality will govern which of the duality effects are present in the focussed awareness.

The remote viewing techniques aligned within the thought/energy of the higher intelligences are required for the proper development of the lower conscious through sensory/perception enhancement. Without a strengthening of connection towards the higher vibrational energies the opportunity for proper conscious development through higher intelligence establishment will hold a low potential.

For effective remote viewing involving the physical plane dimension and the multi-dimensional perception capabilities through sensory enhancement, pure undistorted intuitive information from the higher intelligences will be required for awareness and development.