Remote Influencing And The Eternal Light 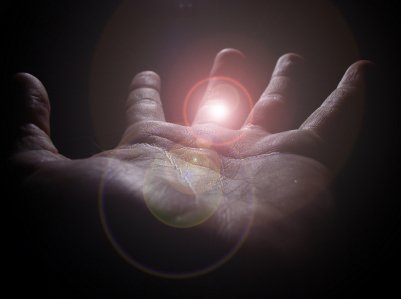 Remote Influencing an individual’s desires powerfully within the physical plane, can only occur within the awareness of the eternal light. This high vibrational energy source, from the core of thought, has projected all sentient beings into creation with the gift of self-awareness. Creation is experienced through self thought, for the purpose of evolvement towards ascension. Since all sentient beings hold the ability of free will to make choice within the material world, numerous paths have been created and await exploration. Our free will choice leaves sentient beings with the decision from an evolutionary standpoint, to descend lower down in vibration towards the negative pole or ascension towards higher vibratory creations through the positive pole.

Although mankind has free will and the ability of focussed intention, no sentient being within this creation is completely immune to perceptual external influence.

The creative yet cunning heavy low vibrational negative energies surfacing into the global consciousness from the lower depths of the underworld, create chaos and undesirable potentials.

Without guidance from the higher intelligence through a strong connection to an individual’s higher self, mankind as a whole is at a serious disadvantage.

A destructive cycle fuelled through the emotion of fear locks many sentient beings within the low vibrational influence for many incarnations within creation.

The world we inhabit with its continuous wars, propaganda and justification for separation create numerous creative stories, which become well designed trappings for the lower selves of the Adamic being.

All of these manifestations have been created through mankind’s innate fear of the unknown through unawareness and projected out into reality to be experienced until the lesson evolves into wisdom.

Mankind’s fear energy has been collected, revised and represented into the collective unconscious by the dark energies of the underworld for perceptual eons of time within linear creation.

The emotion of fear is the most abundant and creative energy within the negative pole.

The artificial intelligence program within the earth matrix, which houses the dark energies from the underworld, has planted the seeds of deception within the mass consciousness vehicle.

It has deceived the masses into the belief that an anxiety fear based existence is but the normal mode of operation and a life time of suffering leads to spiritual rewards in the afterlife. Any ideas apart from these notions mankind is lead to believe, are unfamiliar and unnatural.

We are constantly remote influencing our individual and therefore our collective realities as the accumulation of the separated parts form the whole.

For the individual locked into low vibratory cycles, similar and more complex scenarios will manifest into their external reality projected out from the internal belief system.

The individual’s focussed thoughts and it’s by product emotion, create the energy needed for these negative themes to manifest into reality.

Without the awareness of the source that has projected all sentient beings into creation, the eternal light, an individual becomes lost without navigation within the ocean of consciousness.

This creation was designed for the purpose of spiritual evolution within the Adamic being and therefore, for all of its separations of light which manifest into creation through the human vehicle.

In order for a pure unaltered desire for ascension to occur a variable in the form of free will was incorporated.

Through the free will choice and deceptive manipulation within this low vibratory level of creation. mankind has unfortunately chosen the downward spiral of de-evolution.

This has created a weakened connection by the lower self to its higher self and has formed a barrier to the awareness of the eternal light.

This high vibrational creative light energy remains operational regardless of the path a separation of light follows. If the eternal light within the deep subconscious of an individual ceased to exist, then the individual would also cease to exist.

It can only be de-vibrated and absorbed back into the One if the lower self refuses to awaken through multiple incarnations.

This would be a very difficult decision for the One, as it only operates through the high vibrational energy of pure unconditional love.

Any other movement within the One would have to be executed through a restricted awareness of its self.

The eternal light that gifts all sentient beings the ability to remote influence it’s reality, awaits patiently for the individualizations of Adam to rejoin the upward movement towards its inner core.

An individual or a grouping of collective focus, cannot effectively utilize remote influencing abilities while locked into the negative cycle of victim consciousness.

The perception of the victim-aggressor consciousness causes the individual or grouping to vibrate within levels, that are too low for manifestation.

This action in turn creates an overwhelming movement towards even more negative scenarios within the individual or grouping’s consciousness.

To believe one is a victim reinforces the belief system and creates an inversion. The illogical becomes logical and vice versa.

This thus lowers the vibrational light energy of the lower self and allows movement towards negative and destructive tendencies.

This undesirable movement from a spiritual evolutionary perspective thus allows entrance into even lower vibrational dimensions to be experienced.

Without the knowledge and understanding of the eternal light, is to block access to the higher intelligence and guidance necessary, to ascend above the low vibratory rate of mass consciousness.

For ascension to occur for an individual or grouping the victim-aggressor role must be transcended. To focus on negative scenarios within the global reality with emotional attachment, will further establish the victim-aggressor consciousness, into a more concrete form.

The understanding and application of personal responsibility will initiate the transcendence away from this vicious cycle.

Through the reconnection to the higher self and the activation of dormant potentials within the design of the human being the lower self can regain its inherited power. This will allow the lower self to regain awareness of its eternal light and thus hold the ability to powerfully remote influence its reality.