The Portal Of The Eye Of The Mind 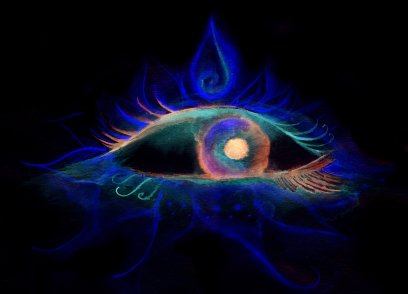 The eye of the mind is a portal to access higher intelligence thought fields and the ability to decode its intelligence structure. This area is the entry point of the source of projection that creates our sense of a physical universe. It is commonly referred to as the third eye and is a point of focus within spiritual awakening. The human brain which decodes electrical vibrations into our perception of a holographic reality, is a frequency of thought within the universal mind. Our material reality is created through the source of our projection the higher self and its interaction with the earth matrix. The earth matrix is an intelligence structure that reflects the vibratory light of the higher selves and creates the three dimensional reality for the higher souls to learn and evolve through.

The purpose of the human brain is to collect information from the higher self and decode the data into a linear sensory reality for the lower self.

The higher self which has the ability to decode non-vibratory thought that pertains to its operations relays this information to its lower self.

It chooses a scenario from what the earth matrix has selected based on the belief system of the lower self and projects the data into the lower parts reality.

This process of information exchange is referred to as the reality loop, as there is a delay from the brain reacting to a situation and it appearing into the senses of the lower self.

What we perceive as our world through our senses, are first projected out from the level of the deep subconscious mind.

As the vibratory light energy of the higher selves refract light onto the non-vibratory construct of the earth matrix it causes the points of focus to vibrate.

This action causes these points of focus to activate their information programs and as they reflect light, the illusion of a material world is created for the lower self to witness.

Through the human perspective we are observing the game of creation as much as we are the observed.

The higher self is recording all of the experiences of the lower self and learns and evolves through this process. The world we see through our human eyes is processed through the eye of the mind.

The majority of the individualizations of Adam become lost in the illusion of the holographic three dimensional movie. Few realize yet unlock the vast potential of this portal.

The human being through the visual sense observes the reflected light as vibratory and non-vibratory thought interact.

The human brain creates for the lower self the sense of an individual through the program of the ego.

This level of awareness is required to learn through the lessons of separation and its’ associative emotions, as these are powerful experiences for the longing for reunification.

Through this perspective the human characters follow many different paths and sub perspectives within their perceived individual lives.

If the portal of the eye of the mind was readily accessed without the development of a higher intelligence and conscience, its potent remote influencing abilities could be abused.

Within the human thought program are many doors to higher creations that can be unlocked and entered. These gateways will not open until the lower self through its human awareness becomes compatible with them.

The key to unlock the portal of the eye of the mind is through its rate of frequency. Until the lower self can consistently raise its rate of vibratory energy to the level of this area of the mind these doors will remain closed.

While an individual remains operating at a low vibratory rate the earth matrix will hold the ability to heavily influence the lower self. It will promote ideas and validations for separation, fear of the other and similar themes.

Real freedom can only be achieved through the understanding of the individual bubble of reality and the true nature of the subconscious realm and its intricate processes.

Through the power of higher thought and emotion the portals to the higher intelligence and creations can be revealed.

Access through the gateways to the higher realms must only be allowed to the ones among us who can be trusted with such powerful creational abilities. This safety mechanism is a vital part of the design of our level of creation.

The source of all of creation is projected from the intelligence within the universal mind. It has many levels of awareness from the very limited such as our creation towards the all-knowing at the core of the One.

The lower the awareness of the whole, the lower the vibratory rate of frequency. To match the rate of vibratory frequency of a point of focus would cause the two subjects to vibrate in sympathetic resonance.

This is an important key for effective remote influencing.

Through the access of the portal of the eye of the mind higher creational abilities would become available for the individual. The ability to sense the vibratory rate of a person or grouping would become natural.

This is vital to check the true intentions of the people an individual interacts with. Higher intelligence would be accessed to decode the information received.

A high degree of intuition and manifestation abilities would become available as well.

All of these higher vibratory tools are needed to avoid the trappings of the earth matrix and for the ascension process into the higher worlds.